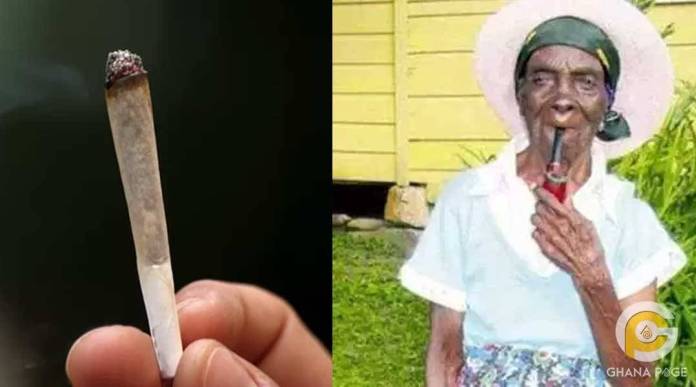 One of the social vices that society frowns upon is smoking especially by the youth.

Research has it that smoking causes cancer and we all know that cancer kills. But a 95-year-old woman has come out to state that smoking is rather the key to long life and one’s happiness.

The 95-year-old woman Jamaican woman identified as Melita Gordon revealed that she has been smoking for the past 85 years which means she started smoking from age 10.

According to her, she won’t stop smoking ganja until she’s dead because stopping could kill her. “When mi goes a doctor he say him ah tell mi fi to stop smoke marijuana, because if mi stop, him a go lose mi,” Gordon told Green Rush Daily.

Gordon’s lifelong habit is happily endorsed by her primary care doctor, whose view is that Gordon’s journey to 100 years might be cut short if she lays down her pipe.

Gordon, along with her doctor, speculate that her commitment to cannabis may be partly responsible for her longevity.

Melita says she got started on cannabis growing up in a Rastafari home, lighting the pipes for her elders. She says she became hooked on the habit of smoking marijuana when she was “baptized” in the practice by her parents, Michelle Jones and Richard Gordon, both of whom smoked pot.

Not everyone in Melita’s family today is happy with her smoking habits, however.

Gordon’s daughter, whom she lives with, has begged her mother to quit. She has even proposed a compromise by asking her mom to reduce her smoking to once a day.

But Melita is used to smoking all day, every day.

And she’s been sticking up for her love of cannabis for as long as she can remember.

Even while she worked at the now-closed Maroon Town banana boxing plant, she became known as the “Pipe Lady” who pulled no punches in defense of her habit.

As in all things in life, balance is essential. And Melita Gordon finds her pot habits offset by her late husband of 50 years. He doesn’t condemn her smoking weed but doesn’t partake in the herb himself.

And he made it to 100, so things are looking good for Melita Gordon.

“he never smoke at all, the only thing him do was drink beer, but he never try force mi fi stop,” she told 18 Karat Reggae of the man who died eight years ago after making it to age 100 years, six months and 12 days.