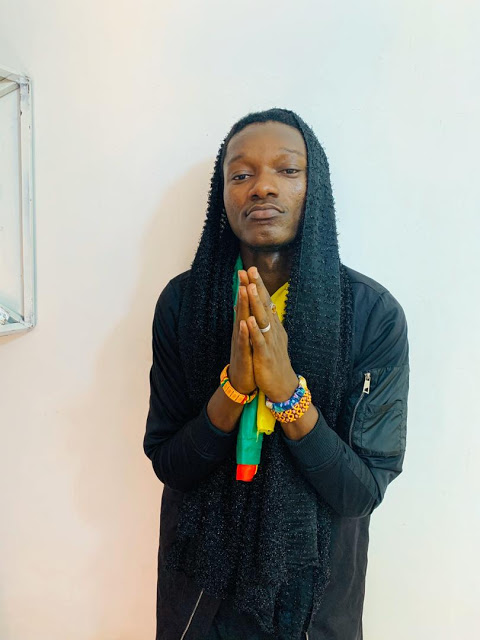 Kulli Jay is Afro Pop singer and song writer. He’s been in the music scene from quiet some years hustling underground with his music career but things ain’t working as it has to be. Today he share his challenges he is facing and some of his music brothers in Ashanti Region(Kumasi) are also facing.

On the talks, he stated some points. That is

“I’m a good song writer and I know my confidence level of saying I’m very good in music might sound irritating to some people because most people in Africa hate people with confidence and also classify them as Arrogant and proud. I’m an upcoming artists as in singing and writing musics. I have faced a lot in trying to bring out my music but it hasn’t been easy because even I have the good song, I still need resources to push that good music out cos good music can be easily pushing itself a little but if there is some resource attached to it, everything gets easier and better. I have been on same scale with me and my underground musician brothers and sisters. I would love to list down some issues we are facing.”

He listed some of the challenges and even blasted some upcoming artists..

“It starts from here ..
1. Music artists in Ashanti Region that is Kumasi to be precise has lot of great talents concerning rapping and singing. I won’t say we better than other regions but we have talents here. My first challenge will be INVESTMENT.
Concerning investment, is very difficult for anyone who organise events or very industrial person to think of investing in artists here in Kumasi. They see things unclear as in investing and loosing cos they lack to believe in talents here.
2. LIES AND DISAPPOINTMENTS
Some times, there can be an investor or managerial process on some of the talents here,but you will see one or two mindset behind the managerial process where you see the management listening to critics and talks from people about their artists. Whereas that artist under the management has been promised to be managed very well so he or she must work very hard with the good songs and must be loyal not to betray the management. From the beginning it gets nicer with respect for the artists, as time is taking place you see the management acting up on the artists thinking he or she might blow up and betray the label easily. For this I think the management mindset is clear but I still think if any management which means business comes to an artists with a signed documents will never think of negative thoughts in the work. So with Kumasi, most artists are been lied without papers or documents to relax their talents whereas in a strictly music business, there is a document signing which protects the work’s strength.

3. DISRESPECT ON ARTISTS
For this side, I will go for every region in Ghana here but most part will be for Ashanti Region and other regions exceptional to Greater Accra. Most of the regions in the country thinks if a musician travels to the capital city that is Accra, that artist is now a reputed artist who is now ready for the music game. If he or she is not outside the region or not basing in Accra they seem to think the artist needs no marks on his music talent. Lack of show billings, lack of money on his or her little effort he puts through the music, Less radio airplay support, Less support from the region especially his or her community. I think every talents coming up needs to be respected because we mostly wait till that person blow up before he or she gets his or her talent respected.

4. ARTIST LACKING BRANDING
They see most artists in Ashanti Region lacking branding. Some of these people who sees that too thinks top arts who are difficult to be found or to be billed on a show has good branding. But when they see an upcoming who has at least made an effort with his or her music career branding and his or herself music concerning shows, either all he or she gets that he or she gets nothing than to go perform and come home with nothing. When complains like this comes from this upcoming arts they hate it. My past experience I was billed on a show and I nearly lost my life. I went to this show which had Yaa Pono and one of my upcoming music brother called K White on. And the audience there requesting that, from them to pay money at the gate for the event, they don’t expect any upcoming artist around. It was very fearful for me and my other brother so the event organisers had to sneak us out from the program unaware of those audiences making that complain. One amazing thing was we charged 1000Ghana cedis for the show and the event organisers had our balance so they gave us our for our presence. And this charges we took through this show help us to get transported home easily. So with this experience I have taken it to myself to respect my career a lot but my challenge is, the people here hate it when an artists billed on a show or been featured asking or demanding with the look of his or her feeling. I think is respect to every artist who got the talent and putting much effort for his career in the community gets something or applauded on his or her talent so that the society don’t see him or her to be wasting his or her talent..

That’s all I can say for now. But I wish Ghana and my people in Ashanti Region see this and put something nice for the upcoming in the industry.. thanks”

These are his points for his concern on investors who don’t care for talents in Ashanti Region.. Google KULLI JAY and see more of his musics. . Listen to some of the songs here 👉  Check Songs