Medikal apologizes to Strongman for dissing his girlfriend during their beef

Medikal, the AMG rapper has apologized to Strongman and his girlfriend, Nana Ama Strong for dissing her in his second diss song to Strongman tittled “The Last Burial”.

In a tweet shared a few moments ago, Medikal told Strongman how sorry he is for involving Nana Ama Strongman in the diss song.

Explaining why he did it, Medikal stated the game has no formula and he was doing all he can to win the beef.

He, however, insisted he has awoken the and he wishes to see Ghana rap music goes global for the whole world to see what Ghana has when it comes to rap.

Strong, I’m sorry for involving your girl in this whole thing, the street just no get formula & filter. Now that I have Awoken the rap game, I would rather like to see Ghana rap music cross borders than to fight for spots here?? 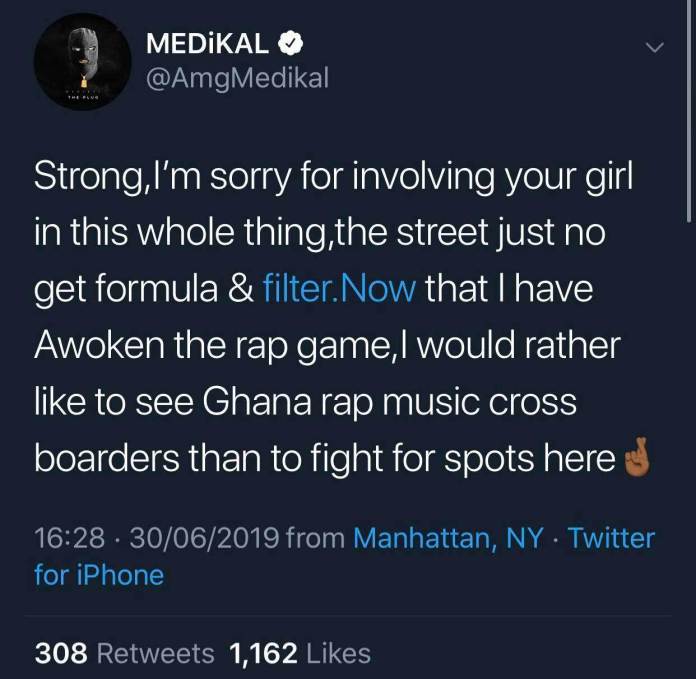 During the rap battle between Medikal and Strongman, Medikal boldly stated a close friend of his called Prosper fingered Strongman’s girlfriend and paid her GHS2000.

Strongman also retaliated that Fella Mkafui is the cheapest commodity in East Legon since the old men use her for supper daily. Strongman is yet to apologize