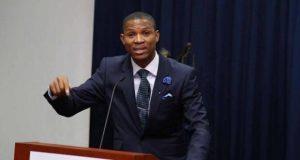 Human Rights Lawyer, Francis Xavier Sosu, wants the President of the Ghana Bar Association (GBA), Anthony Forson, to step aside for a full probe into allegations of rape levelled against him by a Canada-based Ghanaian Lawyer, Kuukuwa Andam.

The GBA President was accused by Miss Andam in a Facebook post. The young Lawyer said she had officially filed a complaint against Mr. Forson with the Washington Police, since the incident supposedly took place in the US state in 2012.

Mr. Forson subsequently denied the allegation in a statement from his lawyers, saying he would be vindicated.

Although the GBA has not commented on the development, Xavier Sosu argues that Mr. Anthony Forson must step aside for GBA to conduct investigations in the interest of the reputable association of lawyers in the country.

“We are people who stand for justice; and we are in the business of justice; so when such an allegation is made against someone of that stature in that position, it will just be right that he or she steps aside. I believe that the GBA itself must even conduct investigations into this. It will be in the interest of the GBA itself as a body to say that our President, can you step aside so we investigate this issue…He is not permanently resigning. He should just step aside.”

“Recently, when an allegation was made against Judge Kavanaugh in the US when he was being vetted for the Supreme Court, the US Senate had to wait and make sure that they do not approve him until the victim was heard and even though people said that the victim did not get justice on that occasion, at least he was heard before the US Senate went ahead to approve Judge Kavanaugh.”

Kuukuwa Andam recounted the alleged incident in a Facebook post on Monday, garnering some empathy as well as criticism from the public.

According to her, she was pursuing a master’s degree at Cornell University in the US, while in a relationship with Mr. Forson, and needed help to pay her rent and keep up.

She said Mr. Forson asked her to meet him at a hotel for the financial assistance, only for him to demand sex before offering the support.

She said Mr. Forson raped her after she had refused to have sex without a condom.

“Yesterday, I filed a criminal complaint with the Washington DC Police Department against the current President of the Ghana Bar Association for a rape that occurred in the US in December 2012, and the perpetrator was Anthony Forson Jnr who is currently the President of the Ghana Bar Association. The investigation is pending and if the case is cleared, charges will be filed against him” part of her post said.

Kuukuwa Andam also recounted the mental toll the ordeal had on her, revealing she was hospitalized for psychiatric care.

She told Citi News that she shared her story after receiving treatment for the trauma she suffered because she wants to encourage other victims who want to seek justice.

Kuukuwa Andam also alleged that her former boss, Selasi Kofi Fumey, who was then the Acting Deputy Director of Legal Aid Ghana, also raped her several times when she was a National Service Person.

She said she was unable to come out immediately to report the abuse because she was scared to go against powerful men or face stigma from society.