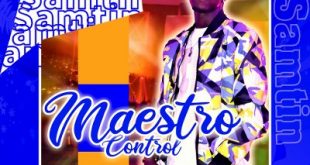 Mr Ray – We Are Coming (Prod. by Nana Beatz & Mix and Mastered by Logizzy)