Akufo-Addo settles on Goaso as capital for Ahafo region 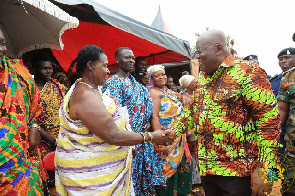 Myjoyonline.com is reliably informed that President Akufo-Addo has settled on Goaso, the capital of the Asunafo North municipality as the capital for newly created Ahafo Region.
He chose Goaso ahead of other towns such Mim, Duayaw Nkwanta, Bechem, Hwidiem and Kenyasi and is set to formally make it known when he presents the Constitutional Instrument to give legal backing to the creation of the region later.
The ceremony is taking place at the Jubilee House on Wednesday, February 13.
Hwidiem and Kenyasi reportedly presented a joint petition to the President to make the two towns, which are about three kilometres apart, the common regional capital.
The Goaso municipality has a population of about 130,502, according to 2010 projections and a population density of 79.5 persons per square kilometre.
It is located between three major towns; Mim, Kukuom and Hwidiem. Other surrounding towns include Ayumso, Akrodie, Fawohoyeden and Nkaseim.
It has a very rich vegetation cover. It boasts as one of the food baskets of Ghana. The predominant occupation of the citizens is farming, which is Cocoa farming and food crops.
Food production in this municipality is very high as compared to other parts of the country which led the New Patriotic Party (NPP) government to launch one of its flagship programs “the Planting for Food and Jobs” in this city.
Business activities in the area are very low during off-cocoa seasons but very high when they start their cocoa season.
The main market day of Goaso is Wednesday and on this day, people from near and far meet to transact their goods and services.
There is one public Senior High School in Goaso called Ahafoman Senior High and Technical School, and a midwifery training institute. There are however other private Senior High Schools and vocational institutes at Goaso.

Previous Salaga Riots: ‘Lawlessness is lawlessness, arsonists’ll be prosecuted’ – Nkrumah
Next Gov’t requests details of 7,000 deportees from US as negotiations continue